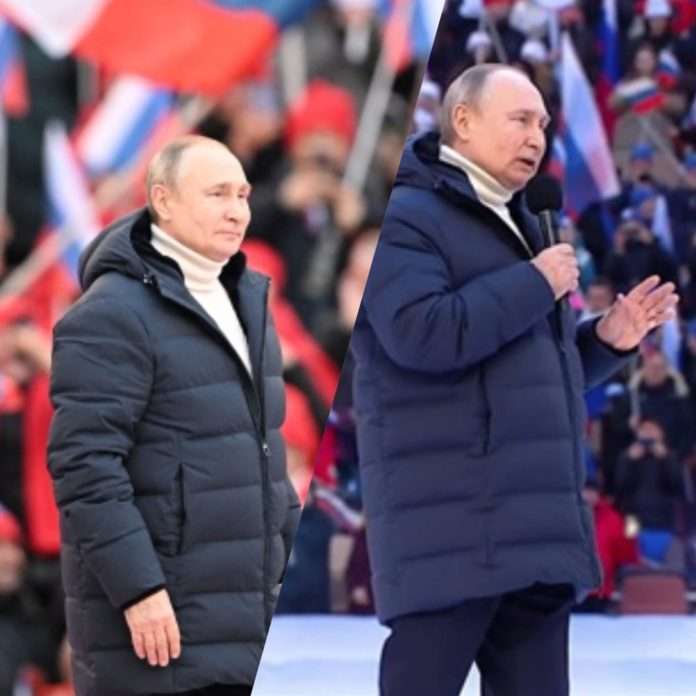 On Friday, Russian President Vladimir Putin defended the invasion of Ukraine in front of a raucous soccer stadium, but his statement on national television was abruptly cut short due to a technical issue with a server, according to the Kremlin.

Vladimir Putin told tens of thousands of fans waving Russian flags and screaming “Russia, Russia, Russia” on a platform in the heart of Moscow’s Luzhniki Stadium that the Kremlin’s goals will be met.

“We know what we need to do, how to do it and at what cost. And we will absolutely accomplish all our plans.”

Putin, assured the crowd from a platform emblazoned with slogans like “For a world without Nazism” and “For our President.”

The “Z” sign, which Russian forces have utilized as a theme in Ukraine, was featured prominently in several of the Russian rally slogans. “Za Putina” — “for Putin” — was written on one of the placards.

Putin, dressed in a turtleneck and coat, said the soldiers fighting in Ukraine’s “special military operation” have proved Russia’s solidarity.

Putin added, “Shoulder to shoulder, they help each other, support each other and when needed they shield each other from bullets with their bodies like brothers. Such unity we have not had for a long time.”

While he was speaking, state television broke away from his address mid-sentence and played already pre-recorded video of patriotic music, although he subsequently reappeared on state television.

According to the RIA news agency, Dmitry Peskov, a Kremlin spokesperson, state television abruptly broke away from Putin due to a technical failure on a server. The cause of the server outage was not immediately obvious.

According to Vladimir Putin, the operation in Ukraine was required because the US was using ukraine to threaten Russia, and Russia needed to protect itself against Ukraine’s “genocide” of Russian-speaking people.

Ukraine claims to be battling for its survival and dismisses Putin’s charges of genocide.

The West denies that it seeks to rip Russia apart.

Until Putin spoke, the powerful national song of Russia, with the lines “Russia is our sacred state,” blared from the stands of the 2018 Soccer World Cup stadium, along with more current musical favorites like “Made in the U.S.S.R..”

According to Foreign Minister Sergei Lavrov, Russia no longer has any illusions about ever depending on the West, and Moscow will never accept an international system controlled by the US, which is acting like a sheriff trying to call all the shots in a saloon bar.

Putin, addressing at the same time that US Vice President Joe Biden spoke by phone with Chinese President Xi Jinping on the Ukraine crisis.

July 31, 2022
Following an intel-driven operation on July 17, 2022, Techiman of the Bono East Region has witnessed six suspected robbers taken into custody by