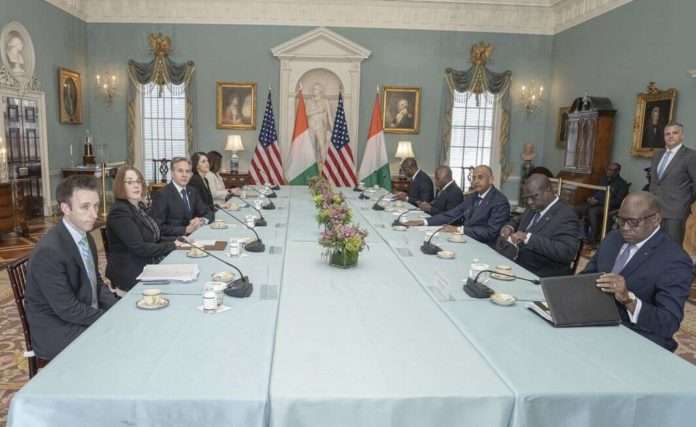 At the US Department of State, US Secretary of State Antony Blinken hosted Patrick Achi, Prime Minister of Ivory Coast, for bilateral talks on a variety of economic and security concerns.

After meeting with the Ivorian leader, Blinken tweeted late Monday, “We join Côte d’Ivoire in the worldwide condemnation of Russia’s invasion of Ukraine.”

Last year, the US gave more than 4.8 million doses of COVID-19 vaccine to Ivory Coast, according to the State Department, which has assisted the country with funding to combat AIDS.

The $524.7 million grant due to Ivory Coast under the Millennium Challenge Corporation (MCC), US agency programme, was also on the agenda.

The grant has not yet been paid out.

Furthermore, via the US Africa Command, troops from both nations partake in several joint training exercises.

After meeting Blinken, Achi said in a statement, “We told them what the challenges and security issues we had were.”

He said, “And, in response to these security problems, we have begun to increase our soldiers’ training.”

“We have also strengthened our equipment and, most of all, we have invested in fundamental social infrastructure…for the integration of young people in order to enhance the living conditions of the communities on the northern borders and to attempt to combat terrorism, which is a menace.”

It occurred as portions of West Africa faced an increasing threat of armed group assaults following the withdrawal of French soldiers from Mali.