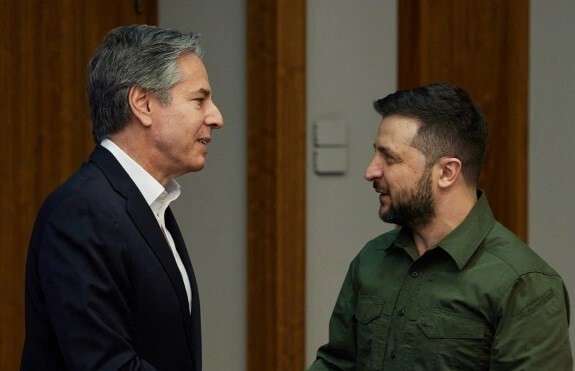 Top American officials met with Ukrainian President Volodymyr Zelenskyy in Kyiv for the first time since Russia invaded the nation in late February, with US Secretary of State Antony Blinken stating Moscow is failing to achieve its war goals.

The cabinet secretaries announced fresh support totaling $713 million for Ukraine and nations in the area during the first official US visit to Kyiv since Russia’s invasion two months ago.

The Russian invasion has sparked worries of further Russian aggression.

They also announced the return of US diplomats to the war-torn country in stages and the appointment of a new ambassador.

Russian President Vladimir Putin’s first goal, according to Western military analysts, was to decapitate Ukrainian forces in a lightning operation, but intelligence services failed to anticipate the extent of resistance.

According to the specialized blog Oryx, which tracks material losses in Ukraine using photos and videos collected on the battlefield, Russian troops have lost more than 500 tanks and 300 armored vehicles.

Moscow has denied plans to destabilize Ukraine’s government and has dispatched more troops to the east.

It launched a massive assault there last week in an attempt to take control of the Donbas region’s eastern provinces.

The fact that Blinken and Austin were able to visit Kyiv was a testament to Ukraine’s resilience in pushing Moscow to abort an attack on the capital last month, despite assurances of further help to ward off Russian forces.

Austin said Zelenskyy, “What you’ve done in repelling the Russians in the battle of Kyiv is extraordinary and inspiring quite frankly to the rest of the world.”

Austin told Zelenskyy, “we are here to support you in any way possible.”

“The reason we’re back is because of you,” Blinken said to Ukraine’s president, “because of the extraordinary courage, leadership and success that you’ve had in pushing back this horrific Russian aggression.”

Prior to the arrival of US officials, Zelenskyy had petitioned Western authorities for more heavy weaponry and supplies, which he claimed were necessary for Ukraine to recover Russian-occupied territory.

“As soon as we get [more weapons], as soon as there are enough of them, believe me, we will swiftly recapture this or that region that is temporarily held,” he told reporters at a Kyiv metro station during a press conference.

Western officials visiting Ukraine, Zelenskyy warned, should not “come with empty hands,” but rather with the “military help we require.”

US House Passes Bill to Ban Some Assault Firearms

July 31, 2022
In reaction to a string of shocking mass shootings, the US House of Representatives has passed a bill that would ban some assault firearms for the first