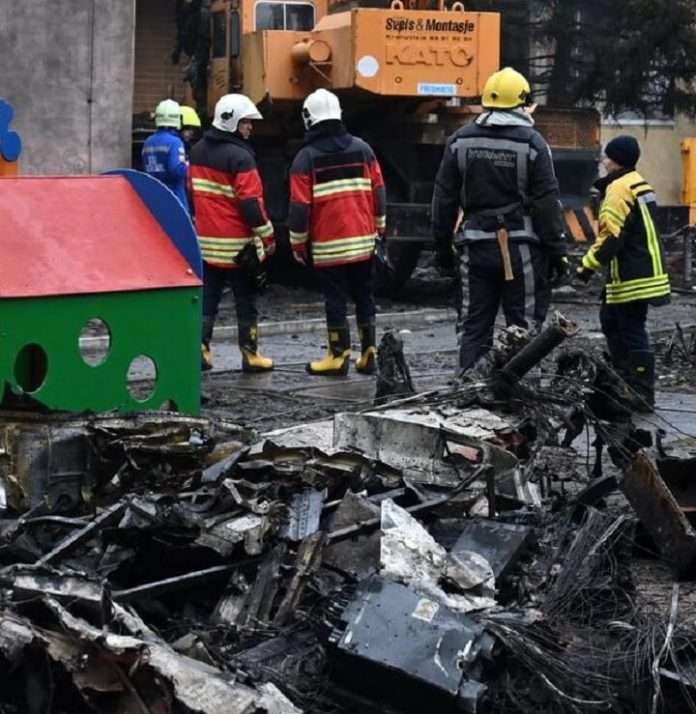 A helicopter accident outside the Ukrainian city of Kyiv claimed the lives of at least 16 persons, including the Ukrainian interior minister and 2 children.

According to Ihor Klymenko, chief of the Ukrainian National Police, those slain on Wednesday included Interior Minister Denys Monastyrskyi, his deputy Yevhen Yenin, and State Secretary of the Ministry of Internal Affairs Yurii Lubkovych.

It was not immediately clear what caused the helicopter to crash in the town of Brovary.

The regional governor said 29 people were also hurt, including 15 children.

“There were children and…staff in the nursery at the time of this tragedy,” Kyiv region governor Oleksiy Kuleba wrote on Telegram.

Several dead bodies draped in foil blankets lay in a courtyard near the damaged nursery. Emergency workers were at the scene. Debris was scattered over a playground.

Kyiv said that the deaths are a “huge blow” for the country “on a government level”, according to Aljazeera.

“This is Ukraine’s interior minister, one of the highest posts in the country; his deputy,” Butler said. “These are key figures in Ukraine’s government at a time when the government is at war with Russia, so this will be a huge blow to the country no doubt.

“You can only imagine some of the conversations happening right now, in Kyiv in those government circles as to what’s going to happen next.”

Monastyrskyi, responsible for the police and security inside Ukraine, would be the most senior Ukrainian official to die since the war began.

July 31, 2022
According to his Senegalese counterpart, Macky Sall, Ukraine's President Volodymyr Zelenskyy has requested a meeting with the African Union.