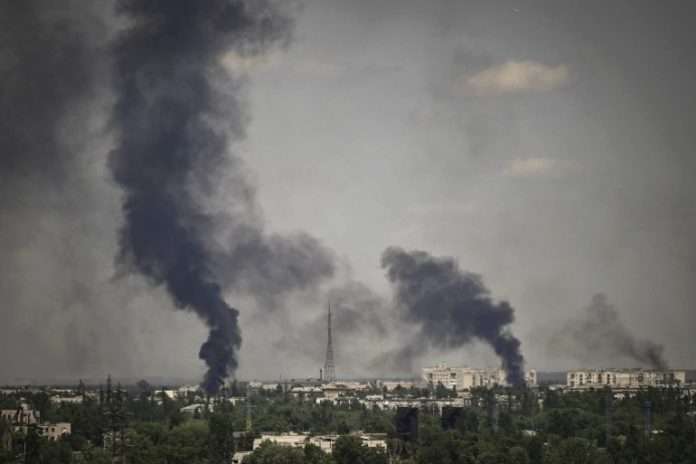 Several explosions shook Kyiv, Ukraine’s capital, early Sunday, a day after officials said that Ukrainian soldiers had regained a stretch of the eastern battlefield in a counteroffensive against Russia.

“Several explosions in Darnytskyi and Dniprovskyi districts of the capital,” Kyiv Mayor Vitali Klitschko wrote on the Telegram messaging app. “Services are already working on site.”

At least one person was hospitalised but no deaths had been reported, Klitschko said. Other officials said the Russian bombardment appeared to be targeting the railway network.

Russia’s defence ministry later on Sunday claimed the raids destroyed tanks and other armoured vehicles on the outskirts of Kyiv that had been provided to Ukraine by its Western allies, as President Vladimir Putin issued a new warning to the West against supplying long-range missiles to Ukraine.

If Kyiv is supplied with long-range missiles, “we will draw the appropriate conclusions and use our arms … to strike targets we haven’t hit before”, Putin was quoted by Russian news agencies as saying.

His remarks come days after the United States announced it would supply Ukraine with advanced Himars multiple-launch rocket systems. Himars is a mobile unit that can simultaneously launch multiple precision-guided missiles up to 80km (50 miles) away.

The mayor of Brovary, a medieval town 20 kilometers (12 miles) from Kyiv, asked residents to stay inside their homes because of reports of soot from the smoke.

September 11, 2022
The chief of the Ukrainian army said on Sunday that Ukrainian forces continued to advance to the south and east of the Kharkiv region as well as to the