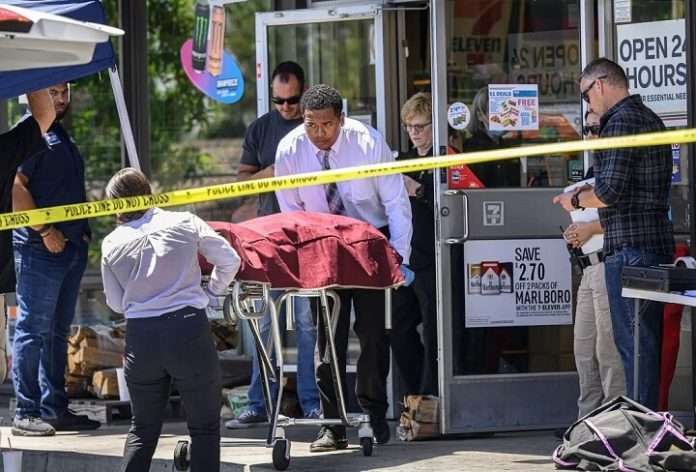 In a series of shootings that occurred during armed robberies at several 7/11 convenience store locations in Southern California, at least two people have died.

While detectives are currently looking into the other events for links, at least four of the incidents are believed to have been done by the same person.

The robberies happened early on Monday and fell on the chain’s National 7/11 Day, when patrons receive a free Slurpee ice drink.

Around 4:18am PST, a robbery took place in Brea during which one store clerk was shot and killed. At the scene, the clerk passed away.

Brea police shared surveillance images on social media of a guy in a black sweatshirt with a hood covering his head. On the front of the sweater were white letters with green leaves.

Cops refused to say what, if anything, was stolen from the Brea store or from the victim.

According to reports, a similar robbery happened at a 7/11 in Santa Ana roughly an hour earlier, at 3:23am. In the parking area of the shop, a guy was discovered lifeless.

Two more people were shot outside a 7/11 in La Habra, and a store was robbed in Riverside. A customer there is presently in critical condition after being shot in the head.

In the Riverside case, the gunman robbed the clerk and brandished a gun, then turned the weapon on a customer, opened fire and fled, Railsback said. Police believe the clerk handed over cash from the register.

“It doesn’t appear to be any reason that the suspect shot the customer,” Railsback said. “It sounds like the clerk gave him whatever he asked for.”

According to Railsback, the cases were unusual because criminals are aware that robberies at convenience stores often don’t result in huge sums of money, especially when they happen during the overnight hours.

“If you go hit a liquor store or a 7-Eleven or a fast food place, you’re not going to get a lot of cash out of it,” he said. “It’s kind of odd that they would do this.”

August 13, 2022
During this week's search of former US President Donald Trump's Florida home, FBI agents removed 11 sets of classified documents, some of which